- June 23, 2020
The week following their meeting, true to Eric's words, the contract was awarded but it was to Martins.
He was shocked to the bones when he got the news. He asked so many questions, how was it even possible when his name wasn't in the proposal and not forgetting he didn't own any company. I guess you could say the effect of his association with the gentlemen club was already being felt.
Yes, Martins had agreed to join and was duly initiated.
The execution of the contract came and gone. Within a space of one month, he made more money than he ever dreamed of making in his entire life. He moved his family into the high brew area of Abuja city and set Alice up big time with a shopping mall in the heart of the city.
Three months into the whole "miracle" turnaround. One Friday, after the gentlemen meeting, the president came to Martins. "Put a call across to your wife Martins, you will not be going home tonight. You have a meet up tonight".
"What is a met up? I mean what is that supposed to be about?" He asked.
"You will find out when you get there" the president replied. "Remember to put a call across to your wife, and remember to be nice when you are speaking with her Gentleman!" he concluded as he tapped Martins's shoulder and walked away.
Martins got to the hotel room 101 and knocked on the door. He wasn't sure who was in the room or what his mission there was but he sure had the feeling that it was not going to be good.
He knocked again before he remembered that he had an access card with him. He swiped the card and the door opened.
He entered the room and met the biggest shock of his life. There he was, a serving minister of the Federal Republic right in the room. The minister's presence in the room wasn't as shocking as to why he was in his briefs.
Yes, you guessed right. They tangled! 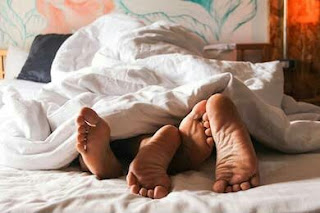 That night was the most horrible night for Martins. He couldn't believe what he just did. It finally occurred to him that he had sold his soul to the devil the minute he agreed to join the gentlemen club. He felt so ashamed and dirty. He thought so hard about his family, his wife, his son, and if he will ever be able to look him in the eyes and tell him what daddy has done. He also thought about his walk with God and where he missed it but he concluded that it was already too late now.
That was only the beginning and it would not be the last.
As soon as he got home the following morning, he headed straight for the bathroom. He stayed in there for as long as he could remember because he wanted to wash all that uncleanness off him.
When he finally got out, Alice was too busy with the excitement of the news she wanted to share that she didn't even bother much about the supposed business meeting that kept Martins out all night.
"I went to the doctor yesterday, I am pregnant" she joyfully announced.
Martins received the news of Alice's pregnancy admits mixed feelings. He was particularly happy about his growing family and on the other hand, worried about the gentlemen club web he had just gotten himself into.
Martins one night tangle soon became a regular affair amongst many other atrocities and fraudulent activities he had to commit.
As his business and finance grew so did his involvement in the gentlemen club and it was only a matter of time before his wife would reorganize that there was something not right with her husband.
In the next few months, things had greatly changed with Martins. He no longer related to Alice as a wife, church services were now a one-off. He only attended church whenever Eric was in town and of course, they were both seen in church in the company of the other two members of the gentlemen club.
Alice began to have suspicions and whenever he asked Martins to come clean and open up on what it is he was really into it always ended in a heated argument.
By the end of her second trimester, Alice started developing complications and Martians suggested it was best for her to relocate to the United state of America.
In his words "I care so much about you to allow anything happens to you and our baby. It is best you go to the US and be sure you will have all the medical care and attention over there".
***   ***   ***   ***   ***   ***   ***   ***  ***   ***   ***   ***   ***   ***   ***   ***
***   ***   ***   ***   ***   ***   ***  ***
Thank you for following the story so far.
What do you think will happen next?
Click to read the 'Forbidden' part five here
Remember to subscribe to this blog and share the link with friends.
Photo credit : shutterstock.com
© Rachel Jesuseme
SHORT STORIES- TRUE TALES