- June 09, 2020
FULL CIRCLE (PART FOUR)
By the following week, Chi and I were in Nigeria to attend my parent's funeral. Chiamaka's parents were already waiting at the airport for our arrival.
The journey down to Ibadan was a long and lonely one. By the time we got home, Iya Bishop and the church council were there to receive us. She gave me a long hug, probably the longest I've had in a lifetime and for the first time I cried my hearts out on my grandmother's shoulders because seeing her, it suddenly hit me that truly my beloved parents were no more.
The burial arrangements were handled by the church council, the university as well as the office of the Federal Ministry of Women Affairs and were well attended by dignitaries. On Sunday the Governor paid us a visit to commiserate with the family as he had earlier scheduled state matters that prevented him from attending the burial. Tons and tons of people tripped In to offer their condolences.
Chiamaka and I returned to the UK after one week of the burial and every other activity that went with it.
By the time we got back, everything had changed or maybe just in my eyes. I started to notice the emptiness of the city, the mean and rudeness of the people and the not so friendly nature of the church we attended.
It was in church I met Jay, Jaywan Olanipekun. Jay and his friend Ola were both members of the same church (Did I mention Ola was Chi's boyfriend) Chi had told me earlier that she met Ola's friend who seemed cool-headed and she was very eager to introduce us at least to help me get off the pain of losing my parents.
True to Chi's judgment, Jay was a cool guy to be with. He knew all the right words to say to me in my moments of grief and before long we soon became an item. By the end of summer, Ola and Jay had rounded up their master's program and returned to Nigeria but we kept in touch. Our love grew stronger as the distance was not a barrier. He even went to visit my grandmother in Ibadan.
Iya Bishop called me that Saturday afternoon and I could almost hear the sound of laughter in her voice after a long time of mourning my parents.
By now Chi and I had also rounded up our master's program and returned to Nigeria. Chi got a job with one of the leading law firms in Nigeria based in Lagos while I joined an international engineering firm with a recommendation from the UK. We were living in the finest area in the city of Lagos with a well-furnished apartment, had good cars, and the men of our dreams in our lives. Life was good. The only trouble we had was the constant marriage calls from Chi's parents and Iya Bishop.
On my 29th birthday, Jay proposed and I accepted. He had planned a private dinner with few of our friends, of course, he had Chi to help him pull off the stunt because she had to drag me out in the evening with the pretense that she wanted us to spend the evening alone just like when we were young.
I had the proposal of my dreams, just like in the movies. I walked into the restaurant of a five-star hotel and there were candles and roses everywhere with my favorite singer ushering me in and Jay kneeling on one leg. I couldn't wait for him to ask the question before answering "yes".
Apart from being from an influential family, he owned one of the biggest businesses in Lagos and he was doing well, so a loud yes it was to his proposal. 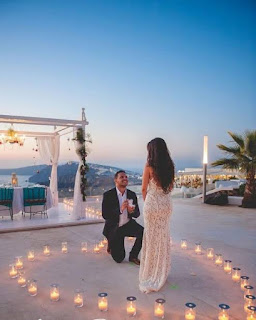 We broke the news to Chi's mum and Iya Bishop and by the afternoon of the following day Chi's mum was already in Lagos in her words " since one of you have decided to get married, we need to quickly plan this wedding before you change your mind".
The wedding planning took a toll on me. Jay wanted a loud wedding, According to him "I need to make a statement"
Jay became overly aggressive over every little thing. He became extremely controlling and wanted the wedding his way. I made my fears known to Chi's mum but she waved it off saying I had nothing to fear that the pressure of the wedding was affecting him which is a normal thing in most cases.
In the course of planning my wedding, Chi broke up with Ola over issues of cheating. I tried to settle things between them but that was a deal-breaker for Chi and there was no going back. I tried to put in the effort and positive energy into the wedding preparation, I wanted to at least make sure something was working out for one of us so I decided to ignore whatever issues I was having with Jay.
Photo credit: Pinterest.com
**********    **********    **********    **********
What do think Yewande should have done at this point?
What would you do in this situation?
Please keep the conversation going in the comment section.
Thank you.
© Rachel Jesuseme
SHORT STORIES- TRUE TALES