- August 07, 2020
Dear Same Tribe,
How are you all doing this fine Friday afternoon? I am well, thanks for asking.
I had an encounter with a little someone sometimes ago and trust me to share with you all.
You all know what the good book in Proverbs chapter 22 verse 6 says? "train up a child in the way he should go: and when he is old, he will not depart from it."
I have been trying my best in bringing up my girls, Tana and Tilda aka Ari in the way of the Lord and I just might have shot myself on the foot.
Tana said what? Oh no, she didn't.
Please read. 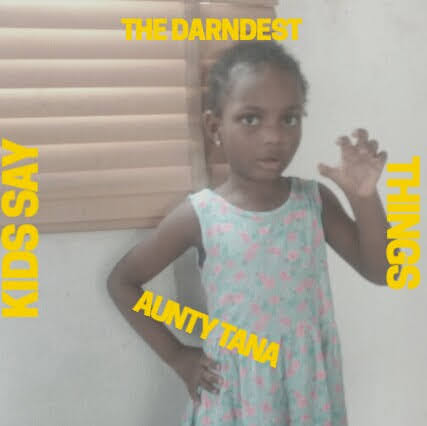 So I read somewhere in one of the female groups I belong to online that women could use the baby diaper as sanitary towels *side eye at you all*.
That was how I decided to experiment with Ari's diaper and boom! Tana caught me in the art. She started asking me what I was doing with Ari's diaper and if I asked before taking what does not belong to me (no thanks to all the lecture on not taking people's things without asking)
She even called Ari to the room and made me apologize to her. All along she kept on saying "wow, mummy I can't believe you will do this", " I can't believe you will take people's things without asking".
See my life! I'm sure I must have said a million "I am sorry" in the humblest form to Ari who was now smiling like someone who had just eaten fresh corn.
I thought my sins were forgiven and forgotten until two days later and this happened...
Me: Osey, diaper don finish o
Papa: How come na, abi una dey chop am?
Tana: (from nowhere) daddy is Tilda's mummy that is using the baby's diaper o (now putting both hands on her waist like Iya Risi in Ojota market) "daddy can you believe mummy took baby girl's things without asking?"
Papa: ( to me) so you don dey roger small pikin diaper now abi?
Ha! The life of me.
I said a million " I am sorry" again
O! the humiliation.
you see all those online DIYs, one key lesson I've learned is to study the terms and conditions thoroughly.
By the way, I'm never going to stop teaching the girls the right things and in the ways of the Lord. I'm just going to stay away from people's things henceforth to avoid stories that touch.
I am going to cry some more right away.
PS: I need a vacation from these two little humans. Is anyone ready to take me in?
Xoxo
© Rachel Jesuseme
JUST FOR LAUGHS