THE CONFLICT OF CULTURE AND RELIGION. Am I being too traditional?

- June 21, 2021
THE CONFLICT OF CULTURE AND RELIGION.
Am I being too traditional?

The ideas, customs, and social behaviour of a particular people or tribe is clearly seen and displayed in their way of life.

One could easily identify where a person is from just by listening to him speak, the outfit worn sometimes, mannerism or gestation.

While this might be a thing to be proud of, it could also be a worn off as some demeaning jobs, biased stereotype, and poor pronunciation of words are constantly assigned to certain tribe.

I do not think this is fair.

If culture is a way of life, why do you judge me by the way I talk or act? Isn't it supposed to be who I am? 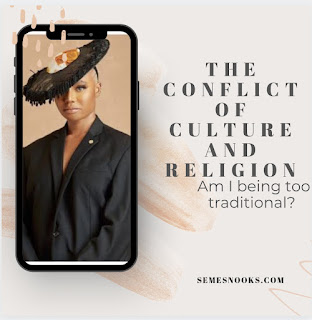 A Hausa man from the North is king amongst his people until he goes to the south and he becomes an Aboki who is expected to clean up after your mess.

The Yoruba man from the west should be allowed to breathe and deal with his “H” factor at his own pace. After all nobody dares ask an Igbo man from the east why he chooses to replace the “l” in love with an “r” just because he has enough money to throw around.

And an Ishan man who won't stop eating pounded yam and rice at the same time with a basin of tea to wash it down. Oh well, his ancestors have been on that journey and their digestive system isn't complaining so deal with it.

When you think the conflict of culture is about to end, you step into the church and you are told to hush because your appearance is not good enough to get you into the presence of God.

I often wonder why the segregation though. Are we not all supposed to be children of God?

In church culture there are the Holys of holys, AKA the SU (scripture union). These are the early Christian who got born again in secondary school in the olden days and have completely done away with any form of ornament for beautification. Their hair safely hidden under a scarf and even looking at the mirror is considered a sin. The bride of Christ indeed!

Then come the millennials. The rascals who just show up anyhow in their father's house with ripped jeans and the men have the nerve to even weave their hair and have piercings too.

This is the new church culture and I doubt if it will ever change from here.
And the church won't stop fighting over who is holy and who is supposed to have direct access to God, and who should be at the back seat.
In all, moderation is key. I will not teach an adult how to show up in his Father's house or how to carry himself about because Christianity doesn't end in a church building but my exhortation is of holiness and being a true representation of Christ no matter where and whom you are with.
Selah!
Day 1
On Culture and Fashion week
#WinterABC2021

So Tribe what stereotype exist amongst your tribe or in your country? and what part of church culture do you belong to? What are your views about how people show up in church?

I will be excited to read from you in the comment section.