It's two days to Christmas!!!

As we gradually wind down into Christmas day, Today, I remembered two of my favourite stories of friendship in the Bible.

The stories about friendship, of two men who were both ill. 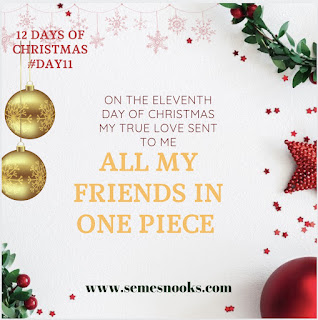 One was crippled for 38 years and all he needed to be well was someone who would put him in the pool whenever the water was miraculously stirred by an angle, yet he had no one to do that for him so he remained sick for good 38years.
John 5:1-15

The other was paralyzed and luckily for him, Jesus was in his neighborhood but there was no way to get in because the room was full. So his friends opened up the roof of the house and let him down to be healed by Jesus.
Mark 2:1-12

The first man was crippled for 38 years and had friends and families who would visit with food, gifts and probably come to just hangout but none cared enough to stay put by the pool for when the angel comes so he can be healed.

The other man had three friends who dammed the consequences of opening up someone's roof just so their friend will be healed.

Dear Tribe, do you have at least three FRIENDS? Cherish them.

I pray you to find people who truly care about you in this season and beyond.