Showing posts with the label CONVERSATIONS WITH SEME
Show all 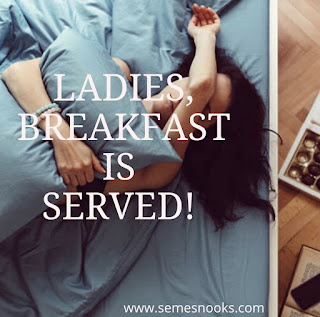 What are you having for breakfast? Well, a wrote A POST a few days back and it did spike a lot of conversations. It was an honest post about how pure and beautiful love is, better still the love of God that made Him send His only begotten son to come to die for the sins of mankind. All was well and good until some people sent their feedback and asked that I leave the issue of love for another day because they are all here “chopping breakfast” My first reaction was laughter. “Chipping breakfast”? isn't that supposed to mean a good thing? I mean it is food, right? But no, “breakfast” in this context refers to heartbreak!  So yes, a lot of us have been going through heartbreak as a result of a cheating partner. Even the married folks, yes married people responded the most. Now, my question is, what really is the reason why a married person will cheat on his or her spouse? Whatever the reason, I don't know but I do know for a fact that it is the highest form of disrespect anyone
Post a Comment
Read more

RELATIONSHIP AND DECEIT. BUT WHY? 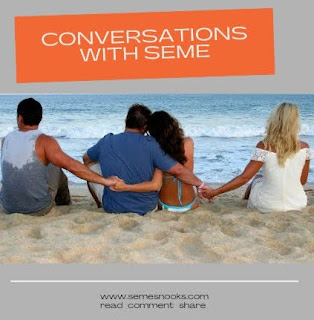 Hey  Tribe! How are you all doing today?  How is the weekend going at your end?  Are there any party on-site or you are like me 'home chilling'. Lol However your weekend is going, I trust you are enjoying every bit of it. So, it is still our anniversary month and we are counting down to May the 26th. If you haven't gotten the gist yet, please hop on board, and let's do the countdown together.  In the spirit of our anniversary, we shall be having one of "Conversations with Seme" today.  Have you been sending in conversations and no comments or feedback from me? I apologize. Even though it seems like all I do here now is just apologize for my shortcomings, and to think that we are clocking one soon. Shey I will not need special prayers like this! Oya no vex.  We have a conversation sent in by our Tribe member, and today we are talking about relationships and the deception that comes with it. Is he asking a question or what? Well, read along Relationship and dece
2 comments
Read more 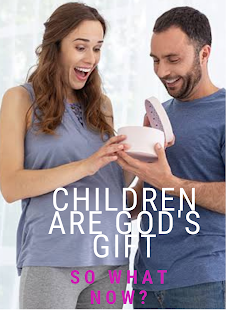 Ok, so on today's conversations, I stumbled on something that has constantly been a reoccurring internet sensation; Push gift or push present. Ha!  Ha ha!!  Ha ha ha!!! First thing first, I just started hearing about the word "Push gifts/push presents" a few years back. In short, the first time I heard about push gift was during my bridal shower when I was getting married in 2014. *now shinning my teeth* I am gradually becoming an elder in the game. Even the Bridal shower was alien to me at that time, as the chief village girl that I am.  *Don't jealous me please*. This has become a common practice everywhere in the world now. ( Or maybe not,  because It is not yet in my village) lol. "Believe it or not, push presents have a long history, even though the idea just became popular in the United States. In the United Kingdom and India, the push present has been around for hundreds of years, possibly even longer. There are some claims that these baby baubles have bee
10 comments
Read more

Hey Tribe! How are you all doing? I hope you are enjoying your weekend and taking some time out to catch your breath. This is just January and we still have a long way to go in the year so my friend, relax and be taken care of.  In today's episode of "Conversations with Seme *side eye with a grin*.  Yes, you read right "CONVERSATIONS WITH SEME". We have been getting quite a few responses from you all and we thought it was best to bring these issues to the Tribe so we can all rub minds and have conversations here. As you already know, The Seme's Nooks Blog is about sharing stories and life experiences.  So Tribe here goes "CONVERSATIONS WITH SEME". It's about to go down people! Get your seat belt on.  Shall we begin? So recently, I was having a conversation with someone and she was worried about how a friend was doing something wrong and how everyone including her has chosen not to say anything about it. Then I stopped and said "ok, I will talk
6 comments
Read more
More posts